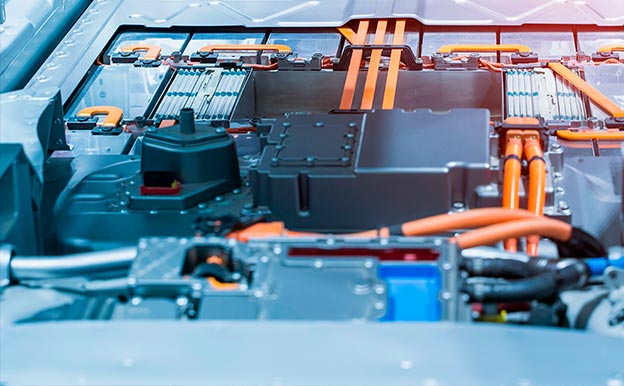 In recent times Lithium-ion battery fires have become no stranger to news headlines with serious incidents now being reported on an almost daily basis. In particular the transition to electric-powered vehicles has created a growing problem for fire and rescue services worldwide as electric car fires pose an increased fire threat. This threat is not only the degree of difficulty in extinguishing the fire quickly and safely but also the potential for spontaneous re-ignition several hours after the initial fire has been extinguished.

In order to fully understand this, one must first understand the process of “Thermal Runaway” which leads to the propagation of a fire throughout the whole of a Lithium ion battery pack or, in this case, potentially the whole of the vehicle.

In large scale batteries there are many individual cells which are linked together and fires normally propagate from cell to cell via the passage of heat from the external walls of the cells and from the electrical connection points which form the individual battery cells into multi cell modules and packs. As the cells reach high temperatures they eventually go into a state known as thermal runaway and this is achieved as a result of a chemical and physical process which at a cell level is not reversible since the resulting chemical reaction is exothermic.

In short it is essential to tackle a multi cell battery fire by extinguishing the fire which has been generated by the individual exploding cell and also by cooling the adjacent cells which will have been heated during the initial fire. It is frequently the case that one cell will heat several others each of which will in turn heat a number of others and the fire spreads on an exponential basis. It is therefore imperative to cool as many cells as possible in order to prevent the propagation of thermal runaway.

A new eco-friendly water based extinguishing agent made and developed from the natural mineral Vermiculite (Aqueous Vermiculite Dispersion) is now available in the fire protection market specifically developed for protection against Lithium-ion battery fires. When applied directly to the cells of a battery in a thermal event AVD quickly extinguishes the flames, the water cools the system, the high surface area mineral platelets interrupt the free radical chain reaction and a refractory film forms which impedes oxygen diffusion to the fuel source. The relatively high viscosity AVD coats the battery; as the water evaporates, the viscosity of the AVD rises quickly further reducing the flow away from the fire source. The AVD quickly forms in to a gel-like structure with water trapped in macroscopic pores. Initially it is the pore water that continues to cool the system and the AVD can be seen to ‘boil’. It is this ability of AVD to trap water close to the source of the fire that enhances its cooling effect.

Another advantage of AVD is that as it dries it forms a thermally insulating film which reduces the risk of thermal runaway propagation to adjacent cells. The non-combustible vermiculite film also coats the packaging of adjacent cells reducing the combustible loading of the system.

Vermiculite is a naturally occurring mineral that is exempt from REACH regulations. It is chemically and physically inert, only releasing steam when exposed to raised temperatures. It is also non-toxic to humans, plant life and animals so there is no concerns that with the clean-up process needing to be managed under regulated processes

Lithium-ion battery fires have no fire classification of their own and they cross the boundaries of several existing categories from A to C. The Lith-Ex portable extinguisher range (containing AVD) has been tested and certified to EN3-7 Class A in order to meet European regulations. The extinguishing agent, AVD can also be applied via fixed systems for large scale industrial applications such as energy storage facilities. The agent is equally effective on varying different battery types and chemistries making it an extremely versatile agent considering the primacies of the natural mineral the cooling effects remain the same