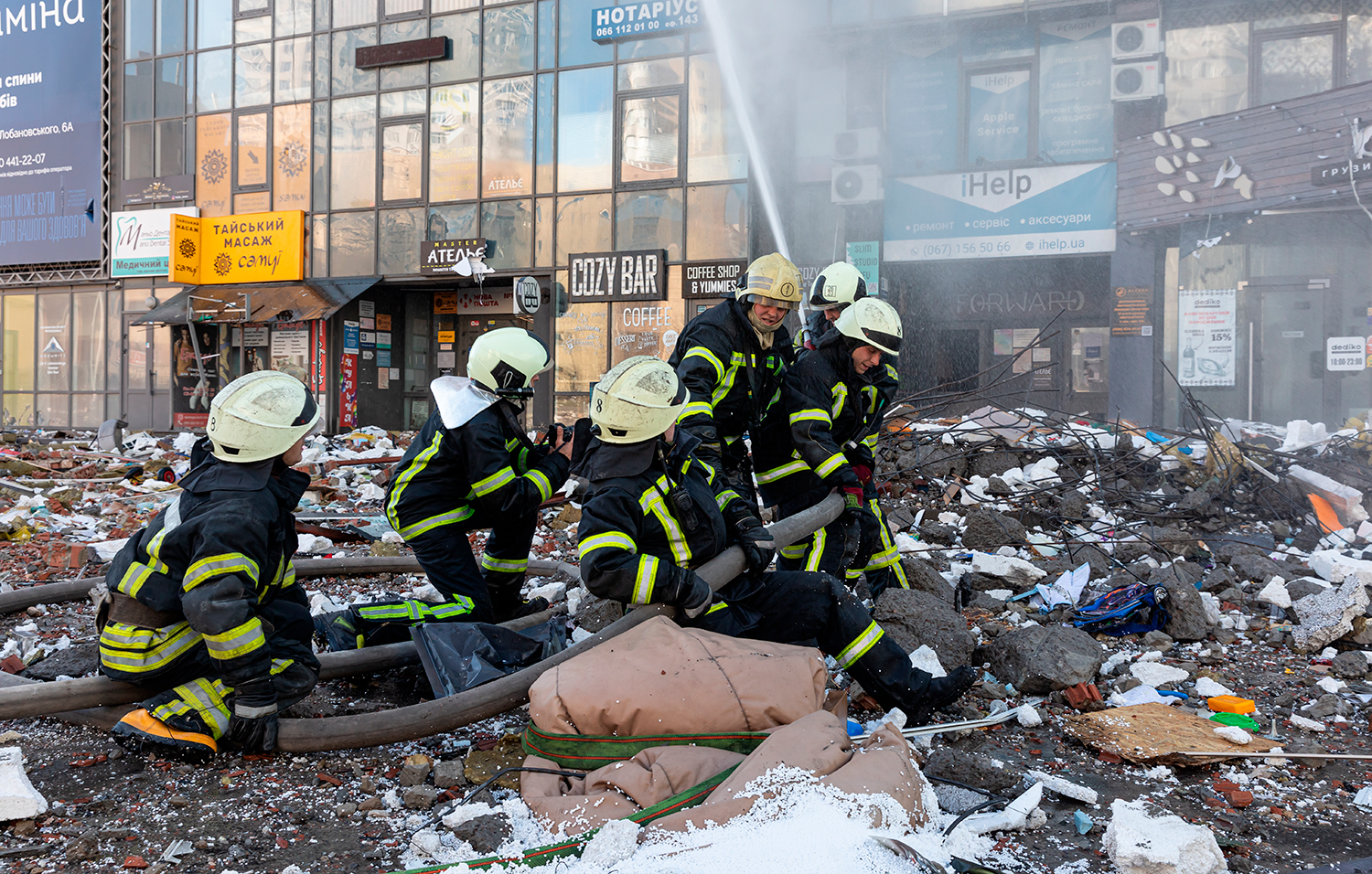 The war in Ukraine is seeing an extremely high number of incidents for the Ukrainian emergency services, with equipment shortages, fire stations destroyed, fire-fighters losing their lives and an incredible level of stress for the individual fire-fighter. Nevertheless, the emergency services are operational in this war-torn country.

The description of war as hell on earth is true. But this is the situation in which the Ukrainian emergency services have found themselves since the end of February, when Russian forces entered Ukraine. Since then, the approximately 42,000 fire-fighters in the Ukrainian fire service have been faced with what can only be described the ultimate, terrible task. Despite this, reports coming out of Ukraine suggest that the emergency services are operational and functional. Bjarne Nigaard, Executive Secretary of the Danish Emergency Management Organisation, explains.

“At least 24 fire-fighters have lost their lives due to shots or explosions during actions. In addition, over 50 of them have been injured and over 100 fire stations and 250 fire engines have been destroyed. The scope of these incidents is extreme, due to fires and rescue operations in ruins and rubble. There is an urgent need for equipment due to the high demand, and because many fire stations and a lot of equipment have been destroyed. But the emergency services are operational and have been functioning throughout the war, including in the occupied areas,” he says.

No end in sight

“As a member of the emergency services, you have full sympathy for the Ukrainian fire-fighters. The whole scenario is senseless. Accidents and natural disasters do happen, but here it’s all man-made, and it’s just unbearable. Every loss of human life is terrible, but at this level you really are lost for words. It’s an absurd, inconceivable situation,” says Bjarne Nigaard, continuing:

“Wars are extreme in themselves, but from an emergency services standpoint, the worst thing in this case is that there’s no natural closure. Here in Denmark, we can expect to see an end to an action in connection with anything from terrorism to extreme weather, but it’s stressful not to be able to see a predictable conclusion. It’s incredibly impressive that they can continue with their actions under the conditions in Ukraine,” he says.

Impossible to train for war

It is obvious that the number of incidents in a war zone will challenge the emergency services and their capacity. But for the individual Ukrainian fire-fighter, the situation also brings stress levels far beyond those that can normally be expected as a fire-fighter. In general, the most stressful things are those you can’t train for, explains Henrik Lyng, a crisis and preparedness psychologist at the Centre of Preparedness Psychology in Denmark, who also has 25 years of experience in the field of emergency preparedness.

“As a fire-fighter, you expect to encounter violent incidents and see violent things. But the grotesqueness of reality surpasses the imagination. When you encounter something unexpected that you’ve not trained or prepared for, because you couldn’t imagine it, you become unsure about what to do, and it will often be these situations that affect the individual fire-fighter and stay with them. There are so many facets to dealing with a war in your own country that it’s impossible to train for – for example, they may have to rescue acquaintances or their own family, and the number of fire stations destroyed also suggests that they themselves are direct targets,” says Henrik Lyng.

Everyone – including fire-fighters – expects to create order from chaos, to save lives and put out fires. But in a war zone, there are tasks that the emergency services cannot perform – or cannot perform satisfactorily. There are also tasks that you choose not to perform, knowing full well that there are injured civilians, because there is another task where the chance of success is better, and resources are limited. This is in conflict with the fire-fighters’ self-image and is also a major source of stress.

So, how long can you withstand this pressure? It depends on many things, but even the most robust groups have their limits. The situation in Ukraine therefore places demands on management.

“Fire-fighters have to be withdrawn for a few hours, to a place where they can feel safe and get rest, food and see their family. This must be taken into consideration in when managing actions. Otherwise there is a risk of fatigue, where people sit down and simply don’t get up again, or develop other crisis reactions,” explains Henrik Lyng.

It can, however, be difficult to take people out of service to allow them to rest. Because this means that the emergency services can perform fewer tasks here and now. On the other hand, you can carry out actions for longer periods of time. And when does one action take precedence over another?

“All fire-fighters want to be there when they are needed. But it’s not a sustainable solution when an action essentially lasts for several months. There’s a need for a different organisation than for normal incidents, and we just hope that the Ukrainian emergency services have organised themselves in accordance with the new conditions,” says Henrik Lyng.

It’s tough scenario that the Ukrainian emergency services have to face. But the level of preparedness remains. How can they sustain it?

“It’s all about hope. They’re fighting for their country, and the battle is not lost. They believe that they will succeed and hope that it will all end well. That hope is worth fighting for, and it drives their actions,” emphasises Henrik Lyng.