The future has reached Dubai where the local emergency response service, Dubai […] 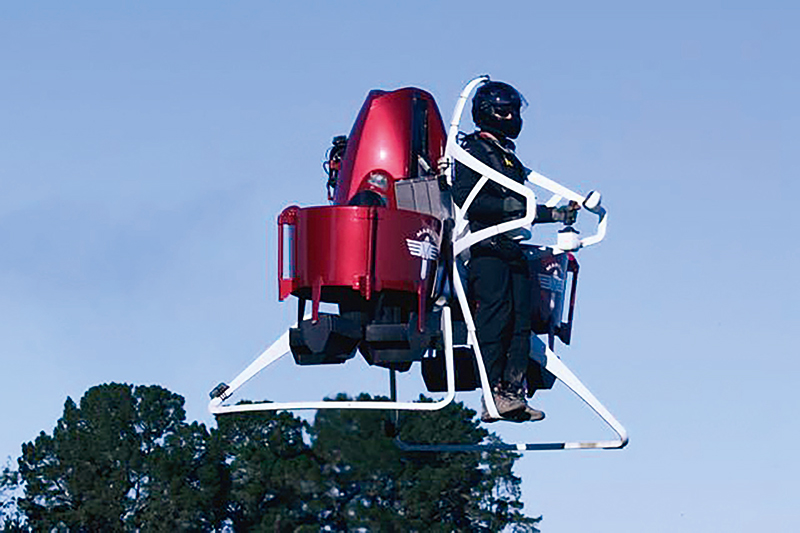 The future has reached Dubai where the local emergency response service, Dubai Civil Defence, (DCD) has signed a contract for the acquisition of 20 jetpacks.  When they fly into service during 2016 they will be used in the event of fires in the Emirate’s skyscrapers.

If you are part of the Danish emergency services and police you may well be slightly envious when you look at your colleagues in Dubai. You see, the immensely rich desert emirate is using some of its abundant resources to buy equipment for its emergency response services. Thus, since 2013, the police have been able to pursue criminals in such makes of car as Lamborghini, Ferrari, Merecedes SLS AMG and Aston Martin. And in 2014 they even considered buying a Lotus Evora and Ford Mustang for the emirate’s paramedics – but nothing came of it in the end.

Now it is fire brigade’s turn. However, this time, they are not contemplating deploying anything as conventional as supercars. At the end of 2015, DCD signed a contract with New Zealand company Martin Jetpack who, as the name suggests, produce jetpacks. In other words, equipment that can be strapped on your back and used to fly with.

First in the world
However, we’re not talking about jetpacks in the traditional sense à la James Bond in Thunderball. Roughly speaking, the Jetpack comprises two horizontal rotors, a motor and a frame that you can strap on your back. The 4-cylinder, 2-stroke engine has horsepower of 200, which gives the jetpack a top speed of 74 km/h, and is capable of reaching a maximum altitude of 1,000 metres, 45-minutes flying time and is able to carry up to 120 kg.

However, the specifications may change before the jetpacks are delivered since they are still being worked on and developed in New Zealand. The jetpack also includes a parachute which can be activated and prevent the wearer going into freefall, and the horizontal rotors enable it to take off vertically, like a helicopter. The fire brigade in Dubai will be the first in the world to use jetpacks in its work.

– Dubai is one the fastest growing cities of the future and, with its skyscrapers and modern infrastructure, it has always been a world leader when it comes to adapting new technology in improve and save peoples’ lives. This is yet another example of precisely that, stated Lieutenant Colonel Ali Almutawa, who is Director of Operations in DCD, in relation to the deal.

DCD has ordered 20 jetpacks (with a list price of approximately 250,000 dollars each) which, under the contract, Martin Jetpack will deliver along with a simulator and training during 2016. By all accounts, the jetpacks should be easy to use and will require limited training.

Evacuation in the long term
According to DCD, the plan is that the new apparatus will be used for reconnaissance purposes. However, the model is powerful enough to carry first-aid equipment and can also be used for rescue missions in places that are otherwise difficult to reach. This could be, for example, in situations in some of the emirate’s skyscrapers, which include the 321 metre high Burj-el-Arab and Burj-el-Khalifa which, at 828 metres, is one of the highest buildings in the world.

Should a fire break out in such a skyscraper (the most recent example being on 31 December 2015 when a fire broke out in a 60-storey skyscraper in the desert state), some people may have to flee to the roof where a ladder is of little use both in terms of evacuation and getting rescue crews to those in distress. However, with a jetpack, both of these things can be done quickly.

The plan is to equip them with thermographic cameras that are able to obtain an overview of the situation. In addition, DCD wishes to test the possibility of allowing a number of unmanned jetpacks to follow a manned jetpack. The idea behind this is that it would be possible to strap people who are trapped on the upper floors onto the unmanned jetpacks and then get a pilot on the ground to guide them down. In this way, it may be possible to use jetpacks to rescue people from otherwise inaccessible places.

Dubai
Dubai is one of the seven Arab emirates which together make up the United Arab Emirates in the Arabian Peninsula. The country is particularly renowned for the extremely large construction projects that have been completed in recent years – for example, the construction of ‘The World Islands’, which is an archipelago of artificial islands set out in the shape of a world map, and two additional islands in the shape of palm trees. The country is also known for its skyline, which encompasses a plethora of modern skyscrapers, including Burj-el-Arab, the world’s only 7-star hotel, and Burj-el-Khalifa, the world’s highest building. Dubai is known as the ‘Singapore of the Middle East’ due to its financial sector and its skyline.