Re-insulation may cause a risk of fire 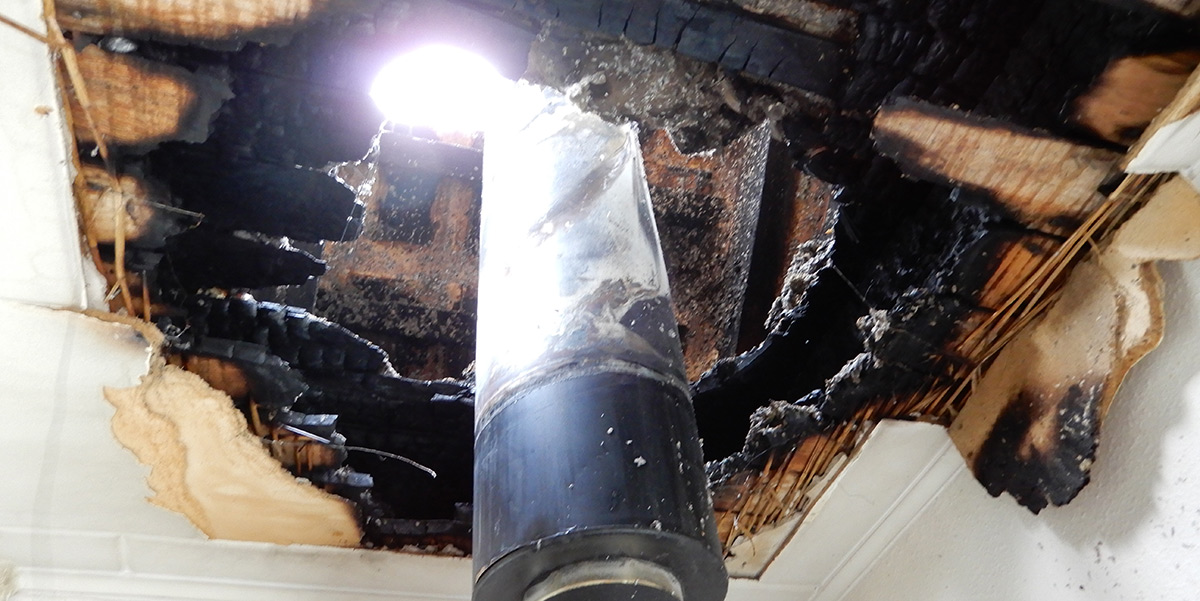 Re-insulation in the attic is popular with many home-owners looking to cut their heating bills. But if the building also has a fireplace and chimney, there are strong indications that this can cause a risk of fire. This is demonstrated by the experiences of both fire investigators and chimney sweeps, as well as tests conducted by DBI.

It makes sense to insulate your house. It benefits the green transition when the extra insulation reduces heat consumption. And in times of rising energy prices, it is also good for your wallet. Many have discovered this, and insulation companies are therefore in a hurry. One of the places where many people are adding extra insulation is the attic. But even though the intentions are good, the outcome can actually be that you end up without a roof over your head. If you have a wood-burning stove or fireplace, the extra insulation may cause a fire hazard. This is indicated by a number of tests conducted by DBI. The idea for these tests came from DBI’s own fire investigators.

“We’ve been called out several times to investigate fires in older buildings with chimneys that have been re-insulated in the attic. Even though re-insulation takes place using non-flammable insulation and using the correct wood structure, they still catch fire,” says Friedrich Grone, fire investigator at DBI, continuing:

“We know from the statistics that fires in chimneys are the most common cause of fire in Denmark, but since the statistics don’t differentiate between the exact causes, we’ve not been able to establish whether there’s a trend in the number of fires in re-insulated houses,” he says.

This suspicion led to four fire tests at DBI, where test installations were constructed with a fireplace, chimney and a section of an attic structure around the chimney – after which a fire was lit in the fireplace. The four fire tests showed that even though the insulation does not catch fire, it has an undesirable side effect.

Part of the explanation is also that the wood in older buildings changes over time. Long-term exposure of the wood to heat causes the ignition temperature to fall.

“The fire probably doesn’t start in the insulation material, as that has good fire safety properties. But it also has such good insulating properties that heat accumulates, and even though there’s absolutely nothing wrong with the structure, it can catch fire due to the heat,” says Friedrich Grone.

“We’ve been informed that there have been fires that are suspected to have started due to increased insulation around the chimney. We’re making our members aware of this, and they point out the risk to relevant customers when they perform annual fire prevention inspections at their premises,” says René Dahl Nielsen, who is a member of the guild’s main board and chairman of the technical committee.

These fire prevention inspections take place at the customer’s premises where the chimney sweep usually works. This happens only rarely in the attics of detached houses, and the inspection is therefore no guarantee that the risk will be detected, mentioned or addressed.

“It’s hard to say how widespread the risk is, but to some extent it’s a ticking time bomb, because there’s been so much re-insulation in recent years. It’s also difficult to say where it might cause a fire, because there are many variables – it’s only a problem on steel chimneys, which are good at conducting heat, and primarily for older ones, which have been tested in a free installation and without insulation. The usage pattern is also significant. If you use the fire a lot more than usual one day, it can be the trigger after a longer period of time, when the wood is affected by the heat and has become more flammable. Regardless of the variables, this is a problem,” says René Dahl Nielsen.

Based on these experiences and the four tests, DBI wishes to investigate the problem in more detail.

“We hope to get support to conduct more tests, so that we gain a better understanding of the problem and the circumstances that can result in a fire. We’d also like to engage in a dialogue with the relevant parties in the area, such as chimney sweeps, and manufacturers of insulation and chimneys, in order to draw attention to the issue,” says Friedrich Grone.

As the scope of the problem is still unknown, it is not certain what is needed to solve it. But possible solutions include sensors around chimneys, increased distance requirements between the chimney and the wood structure, or perhaps requirements for inspections by chimney sweeps after re-insulation.

“As fire investigators, we see relatively often that people combine two things that are good solutions in themselves, but that have unforeseen effects when you put them together – such as when you re-insulate around a chimney. DBI would like to help find, develop and implement solutions in this area, and the first step is more data,” says Friedrich Grone.