New knowledge about battery fires in electric cars on ferries

DBI – The Danish Institute of Fire and Security Technology has recently […] 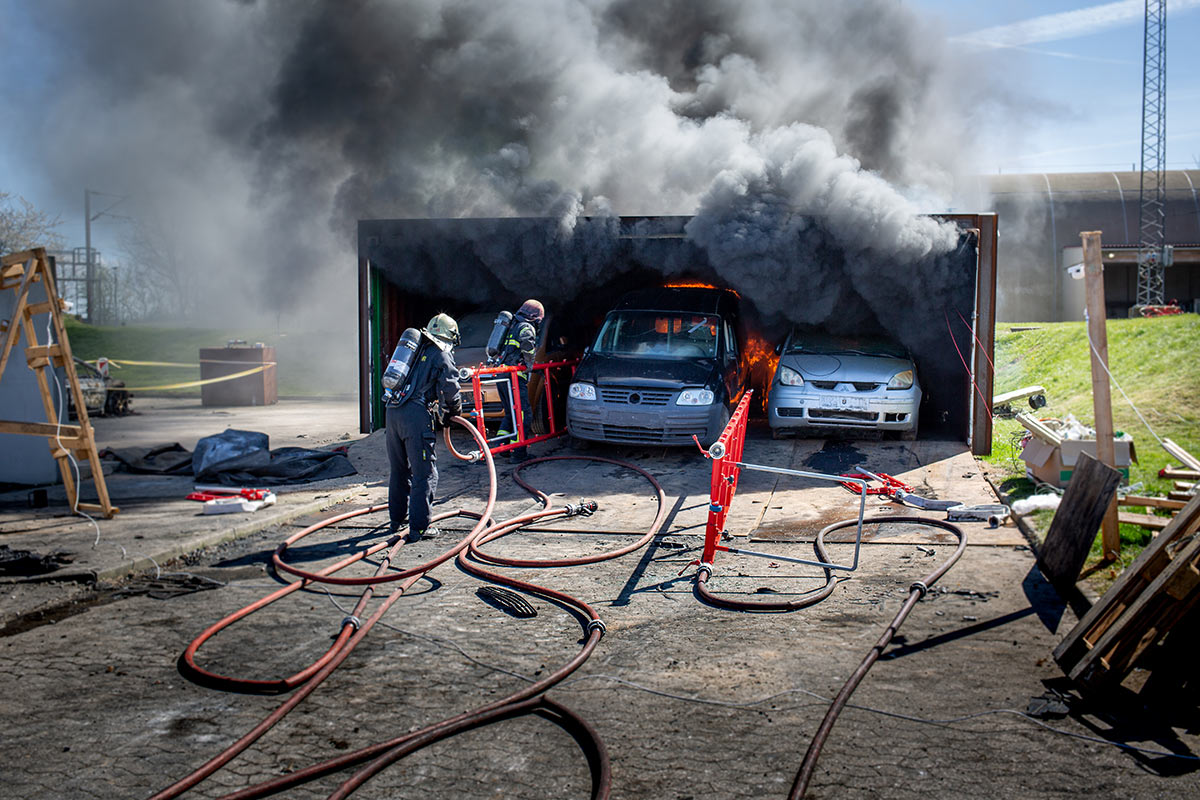 DBI – The Danish Institute of Fire and Security Technology has recently conducted extensive testing into the detection and extinguishing of battery fires in electric cars on vehicle decks in ferries. It took place in a structure consisting of 40-foot containers. Read some of the preliminary experiences and recommendations.

The ketchup effect has hit the car market. Electric and plug-in hybrid cars are flooding onto European roads. At the end of April, there were 166,000 chargeable cars in Denmark alone, and the trend indicates that this number is steadily increasing. According to studies from both Denmark and Norway, there is actually less risk of fire in electric and hybrid cars than in conventional cars. The only problem is that when it does happen, the consequences can be greater, because a fire in a lithium battery is difficult to extinguish and can flare up again long after it has been extinguished.

This is the reason behind DBI’s launch last year of the project entitled Electric Vehicle Fires at Sea: New Technologies and Methods For Suppression, Containment, and Extinguishing of Battery Car Fires On Board Ships (ELBAS), which is supported by the Danish Maritime Fund and has now acquired the first practical experience of how best to detect and extinguish fires in electric cars on a vehicle deck. It took place this spring at RESC (Rescue and Safety Centre) in Danish Korsør, where DBI ignited and extinguished fires in battery packs in electric cars – surrounded by conventional cars – which were parked in a structure consisting of containers that represented the vehicle deck on a ferry.

“We experienced great variations in the development of the fire, even though we had the same setup for each test. In our fourth test, for example, the fire had already spread to the other cars after two minutes. But this is also true in real life – no two fires are alike,” says Alexander Kleiman, Maritime R&D Project Manager at DBI Advanced Fire Engineering (Maritime and Energy).

He is cautious about concluding which technologies and techniques best detect and extinguish fires in electric cars on vehicle decks. This will be presented in the final report to the Danish Maritime Fund and at a workshop in the autumn, once DBI has analysed all the data collected. But Alexander Kleiman highlights some solutions that appear to be effective:

“Sprinkling with water mist proved highly effective. Not to extinguish the fire, but to limit the spread of the fire, so that the crew can get there and put out the fire using traditional extinguishing methods,” he says, continuing:

“Water mist will probably be included in one of our recommendations: a quick response, combining a fixed installation and traditional fire-fighting from the crew on board, so that the fire does not spread and passengers are protected while the ship makes its way to the nearest port, where the emergency services can take over. All the fires in our tests were extinguished, but this required professional fire-fighters. It is known that a fire in an electric car battery can flare up again, so extinguishing it completely can be a lot to expect from a ship’s crew who have only been on a few mandatory maritime fire safety courses,” he says.

It may be possible to combine the above-mentioned measures with a fire tarpaulin that encloses the vehicle like a large fire blanket.

“It didn’t put out the fire in the test, but it contained it. But it does require space to encase the burning electric car correctly, so this solution depends on how closely the cars are parked on the vehicle deck,” says Alexander Kleiman, adding that it is also conceivable that the cars around the burning electric car should be covered by fire tarpaulins to prevent the spread of fire.

In addition to testing specific technologies and techniques, the large number of tests were also intended to confirm or disprove some of the misunderstandings and myths associated with fires in electric cars on ferries. For example, that it is more dangerous to extinguish an electric car fire on board a ferry than on land, because crew members are standing on a metal floor and using salty sea water to extinguish the fire.

“We also did this in our tests, and there is nothing to indicate that this makes the crew’s work more dangerous,” says Alexander Kleiman, who also dispels another myth:

“The battery pack is located at the base of an electric car, which is why there have been concerns that a fire could even melt the aluminium floor of ferries. I couldn’t say whether this is the case if the electric car stands there burning in the same place for 7–8 hours, but our tests indicate that the heat effect from the base of the car is not so severe that it damages the vehicle deck. When we removed the electric cars after extinguishing the fire, there was barely any visible trace on the plates that represented the floor of the vehicle deck,” says Alexander Kleiman, who for the same reason questions the need for a sub-vehicle sprinkler to cool the battery, which was also tested.

Fires appear to be manageable

The large volume of data from the various tests will now be analysed, and will also be used to validate the CFD computer simulations that DBI has developed to simulate the spread of fire on board ferries. Alexander Kleiman offers an optimistic summary of the extensive testing.

“Firstly, the battery pack in a new electric car is significantly more fireproof than in an old one. When we short-circuited the battery cells in a Renault Fluence, the whole battery caught fire. When we ignited it in a newer Tesla model 3, only the battery cell affected caught fire. Secondly, the positive message is that fires in electric cars on board ferries are manageable and not something we need to fear. All the fires in our tests could be extinguished, so with the correct fire-fighting technologies on board, the correct training of the crew and well-coordinated collaboration with the onshore emergency services, electric cars should not pose a safety problem in ferry traffic,” says Alexander Kleiman.

Facts about the simulated electric car fires on ferries