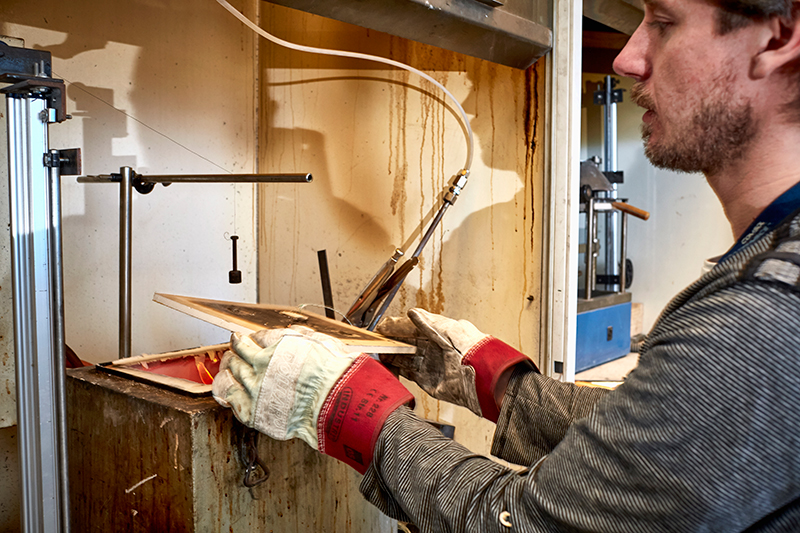 A new means of small-scale fire testing may yield significant benefits for companies that develop new products, as it will enable them to perform multiple tests in a single development cycle. First, however, it is up to DBI to crack the code and pinpoint a well-defined correlation between results derived from small-scale and full-scale testing.

Full-scale fire testing is both time-consuming and costly. As a new tool, DBI is therefore underway in developing a new means of miniature-scale fire resistance testing, which will hopefully lay the groundwork for an effective and less costly method of fire-testing components used in construction, shipbuilding and other industries.

Initially, miniature-scale fire testing may prove helpful to innovative companies that develop new products. If DBI can uncover the key to ‘translating’ such test results to full-scale testing, the faster and much cheaper method may, among other things, indicate whether the development project is on the right track.

– A miniature test will most likely be carried out in just a few hours, which would make it feasible to test several product types at once. It is our goal to be able to use results obtained through small-scale testing as we would those obtained from full-scale testing. This would constitute a significant advantage in connection with development work and when planning the final, full-scale approval test, says DBI civil engineer Trine Dalsgaard Jensen, who continues:

– Valid results from miniature-scale fire testing will give manufacturers greater flexibility in their development work, as testing costs will be considerably lower. For example, manufacturers would be able to test various wall thicknesses to find the optimal dimensions, which would otherwise be far too costly with full-scale testing.

Testing in miniature furnaces
The hypothesis behind the new development project is that several fire safety parameters are the same in small and large-scale testing environments – or, at the very least, that there is a documented correlation between the two.

To test this hypothesis, DBI is working with a miniature furnace in which the test pieces measure just 25 x 25 cm. The initial attempts at controlling the furnace’s temperature, output and oxygen content precisely enough to carry out a test that can be repeated, has yielded promising results. The same is true of tests conducted using mid-sized pieces of 1.5 x 1.5 metres.

The next step in the project is to determine whether small and medium-scale fire resistance testing yields results that are comparable to those obtained from full-scale testing methods. By doing so, DBI will learn more about how to compare results from fire tests carried out in different scales, increase testing reliability and minimise the uncertainty of small-scale testing.

– Over time, I believe we’ll see a sharp reduction in the overall number of full-scale tests. Instead, manufacturers will test materials in miniature scale and use the results as input for a computer model of the complete product, which can then be used as official documentation. As a result, full-scale testing will then be used for model validation. If it works, we’re talking about a whole new generation of fire testing. For this to happen, though, the method must ultimately be incorporated into European testing standards, explains Jensen, who emphasises that this type of small-scale testing is still years away from being adopted.

Comprehensive full-scale testing
Currently, full-scale fire testing is the preferred method and involves mounting pieces such as doors, windows or panels in large test furnaces. The test piece is then subjected to a well-defined ‘fire’ that follows a standardised testing curve. Meanwhile, the piece is observed at a series of temperature points in order to determine whether it is capable of withstanding the fire for the required period of time.

Temperature curves and methods are established in European standards and, as mentioned above, this means of conducting fire tests can be a costly affair. It often takes several days just to set up a testing environment, and one or more test pieces are destroyed throughout the process.

Furthermore, the results of a full-scale test are only valid for the specific product, which means there are limited options in terms of variation. For example, a fire door manufacturer that wishes to sell several variations of the same product type must therefore conduct several such fire tests.

Significant challenges
There are still a number of considerable challenges in this area. Among other things, it is important to understand what testing in multiple scales means for edge effects, mechanical reactions and similar variables.

DBI’s development project…
Is being carried out as part of the research and development project, ‘MAT – Risk Assessment of New Materials,’ which is co-financed by The Danish Council for Technology and Innovation. The development project is a classic example DBI’s efforts as a GTS institute to strengthen the innovative force and competitiveness of small and medium-sized companies.