It is a well-known fact that when alcohol kicks in, common sense […] 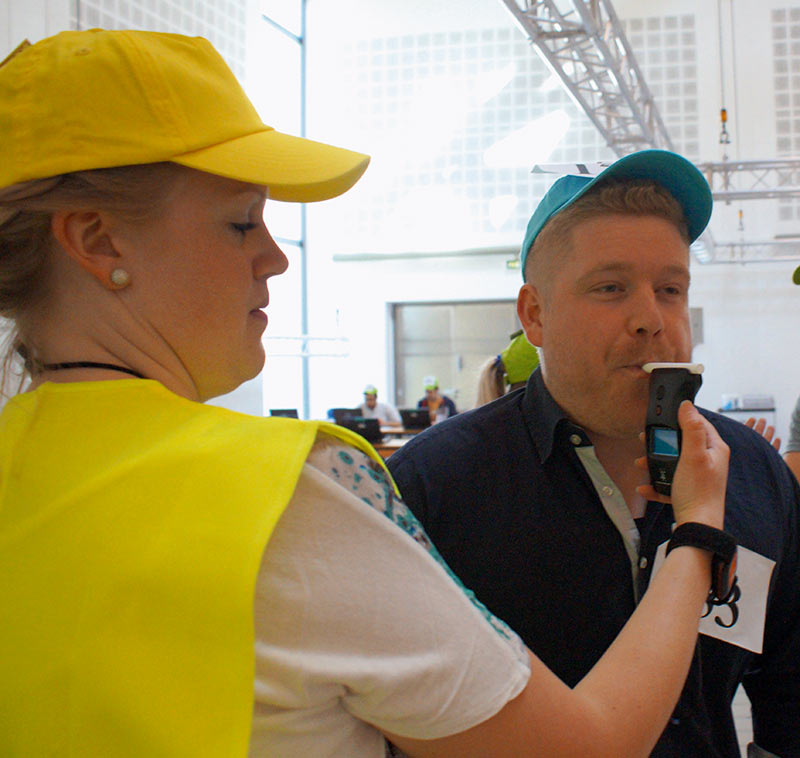 It is a well-known fact that when alcohol kicks in, common sense flies out the window. And with the loss of common sense, the ability to perceive danger, follow instructions, cooperate and move around is also impaired, all of which impacts on an evacuation. Two students from the Technical University of Denmark (DTU) have proven this.

As is widely known, when you consume alcohol, your balance, motor coordination and judgement are impaired. You move differently and you are slower to grasp things – if you grasp them at all. However, none of that is taken account of when simulating an evacuation and organising fire safety and the evacuation of a night club. On the other hand, you can be assured that people will be intoxicated. Instead, the same standards are used for how quickly people move and react as they do in all other buildings.

But, doesn’t alcohol affect how people react in the event of an evacuation? This topic was investigated by two students from DTU, Anne Madsen and Marlene Westmose, for their dissertation.

– We set up a trial in which the participants drank alcohol and conducted various tests in order to test their motor coordination, reaction time and walking pace. First of all, we conducted a reference test during which they were unaffected by alcohol and then we repeated the tests in which the participants were affected by various amounts of alcohol, explains Marlene Westmose.

The tests included, for example, a test of their walking pace and a so-called ‘flamingo test’ whereby the number of times the participants lose their balance when they stand on one leg for a minute is recorded.

Poor perception of own safety
Already after two beers the participants’ balance clearly affected. And, after six beers, which was the maximum permitted in the trial, both the test results and the actual tests were significantly different.

– One of the tests was an ‘up-and-go-test’ whereby the participants had to get up from a chair and run around another chair placed 2.5 metres away and then sit back down on the first chair. After drinking, the participants were overly confident and began to fall over the chair. They had a far poorer perceptions of their own safety, says Anne Madsen.

At the same time, they behaved differently. In the walking pace test, which they did in a group, the participants helped one another far less and it was more about completing the test as quickly as they could for their own sake.

Ruin the mood
Quite simply, the participants’ behaviour changed during the course of the trial. And it was not only in terms of thinking of themselves more and paying less attention to their fellow human beings.

– Existing research shows that, in the event of a fire, recorded warnings work best and shorten the response time in an evacuation of adults who are not under the influence of alcohol. However, in the trial, it was clear that the intoxicated participants generally didn’t listen to what was being said. Therefore, you must question whether this is the best way of getting drunk people to evacuate, says Anne Dederichs, who was dissertation adviser to the two students.

She is a lecturer in DTU’s Department of Civil Engineering where she, among other things, researches the evacuation of people with impaired abilities, including those under the influence of alcohol, and it was she who recommended that the two students research the subject, and who had received support from Knud Højgårds Foundation, the Tryg Foundation and Carlsberg to carry out the trials.

– Perhaps, in order to get through to people, it would be better if we looked at how the mood is ruined. For example, by turning the music off or using a loud siren wail instead, says Anne Dederichs.

More research
Even though the trial gives you an idea of how intoxicated people behave during an evacuation, the results in themselves are no substitute for data in the simulation of an evacuation.

– Based on the results, we must expect that the reaction time and the time it takes to make a decision are longer for intoxicated people. In any case, we can see some trends. But, on the basis of our trial, we can’t conclude anything general about how people behave when they are under the influence of alcohol, says Marlene Westmose.

– The trial provides some data, which we have processed, and which will hopefully result in a scientific article. But, first and foremost, the trial will intensify the focus on the problem and show that more research is needed, adds Anne Madsen.

Meanwhile, the two students can be pleased with their finished dissertations, for which they both received top marks.

The ethics behind getting participants drunk

It is difficult to work with alcohol in a scientific trial. Carlsberg supported the trial so there was no shortage of beer. However, on the one hand, fires in nightclubs have cost many human lives so there is a need for knowledge about how people behave when they are under the influence of alcohol. But, on the other hand, how do you ensure, at the same time, that no one suffers any harm or feels uncomfortable when part of the trial involves alcohol?

– Besides the Danish ethical rules governing the area, we used a code of ethics developed by the Evacuation Group at DTU’s Department of Civil Engineering. This meant, for example, that all participants were informed that they could withdraw from the trial at any time and that there was no requirement for them to drink six beers, which was the maximum limit in the trial, explains Marlene Westmose.

– It is a sensitive area, but it was handled in accordance with all the relevant rules, and the plan for the trial was submitted to both the Danish Council on Ethics and the Danish Data Protection Agency, says Anne Dederichs.

There are good reasons for investigating how you can ensure the smooth evacuation of nightclubs. This is because, throughout history, there has been several examples of fires in nightclubs where frighteningly large numbers of people have not made it out. The most recent example was in Romania where 31 people died in October 2015 when the fireworks in a stage show set fire to the ceiling in a nightclub.
Over the years there has been several incidents where nightclubs have formed the backdrop for tragedies. The five most deadly are: