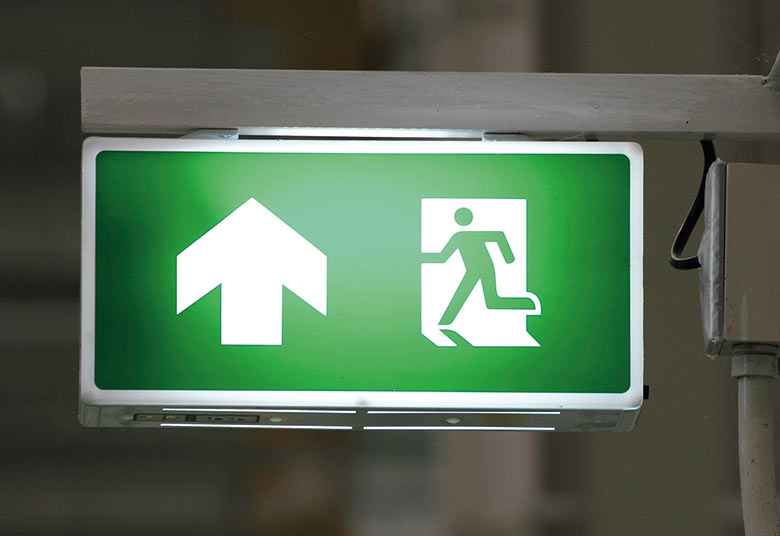 When evacuation signs start flashing, evacuation takes place more quickly and is more evenly distributed. This has been demonstrated by studies from abroad. And new technology also reduces the big unknown in every evacuation: the response time.

Another example: A shopping centre is attacked by armed terrorists. Using fire detection systems, dynamic signage, public address warnings, evacuation simulation programs and video cameras, the shopping centre’s safety officers are able to guide customers and other civilians away from the terrorists and out of the centre, without running into the terrorists’ guns.

Flashing signs tell you to choose a different route
These are imaginary examples, but could easily become reality if the various fire fighting systems were linked together. This is something currently being researched in other countries, for instance in EU-financed projects. These have investigated the effect on evacuation of dynamic evacuation signs – in other words, where the signs flash when the alarm goes off, with a red cross over them if the public needs to choose a different route.

– Experiments show that the public will evacuate more quickly than usual with the dynamic signs, says Lise Olesen, a fire safety consultant at the Danish Institute of Fire and Security Technology (DBI). She continues:

– This isn’t a technology we have seen much of in Denmark. But it could easily be of benefit for evacuating airports or conference halls, where many people are gathered together and are unfamiliar with the escape routes. The same goes for night clubs, where it can be difficult to find your way out and where it is hard to attract people’s attention.

Both the above examples would be possible if the technology was fully implemented and all systems were able to communicate. But complete linkage of all systems is unnecessary for achieving quicker and better evacuation. If just the fire safety systems and the lighting on the evacuation routes lighting can communicate, so that signs will flash when the alarm goes off, this can have a positive effect.

Bringing down response time
Many people don’t notice evacuation signs. Even if we are familiar with the green signs with the stylised icon of a man running towards a door, few people notice them in daily life. We become blind to them – even, unfortunately, when disaster strikes.

– The majority of people will try to escape the same way they came in, without much noticing what the signs say. But if the signs are actually flashing, they attract our attention, and this can lead both to quicker evacuation and less congestion at the main entrance, where most people will typically try to exit, Olesen says.

The flashing sign can also help to bring down the response time – which means the time from when the alarm goes off to when the public start to evacuate the building. Sometimes this can take a considerable period of time.

– When the alarm goes off, there are a number of factors which affect how long people take before they react. Humans are herd animals, so first of all we look to see how other people are reacting. And if you’ve just been served with a steak, you’ll prefer to sit and finish it. After that, you’ll need to find your jacket, your children, your friends or go to the toilet. That is why the response time is the big unknown in an evacuation situation, and dynamic signage can bring down that time, Olesen maintains.

The technology is out there
In rapidly developing fires, every minute counts, so the effect of linking systems and using dynamic signage can be significant.

– Every reduction in response time can potentially save life, and technology provides a number of opportunities for improving safety. This is true of both advanced and simpler solutions, Olesen explains.

It is still uncertain when or how the technology will become widespread but the possibilities are already with us.

– It’s not a question of technology, because we already have what we need to realise the simple solutions. It’s more a question of getting the different systems to cooperate, Olesen says.