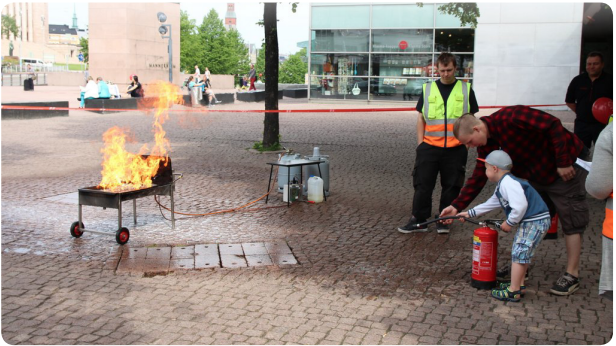 Last year 18 people would have sustained more severe burn injuries if the fires would have spread freely, without first-aid extinguishing. Individual initiative helped save EUR 85 million worth of property. These figures are based on the estimates of Emergency Services College.

Fires also constitute a threat to the environment. However, thanks to first-aid extinguishing 1,400 fewer tonnes of carbon dioxide and 60 fewer tonnes of small particles were emitted into the atmosphere compared to fully developed fires. These estimates were compiled by comparing the average emissions of fires vis-à-vis the fires which were put out by first-aid extinguishing.

– Even if the numbers are not exact, they clearly demonstrate an impact. First-aid extinguishing makes a great difference, both in environmental and human terms, says Johannes Ketola, Data Systems Designer at the Emergency Services College.

Still, there is room for improvement. Last year there were 200 building fires in Finland where nobody even attempted first-aid extinguishing, even though there were people and fire extinguishers at the site.

– Decisive action, without endangering oneself, is indispensable when fire strikes. The most important thing is to save those in danger, says Heli Hätönen, Head of Development at SPEK.

– Learning the skills needed for first-aid extinguishing is a good, practical way to ensure the safety of people and property. Even though a fire is a frightening experience, it is much easier to spring into appropriate action to extinguish it after having received training. 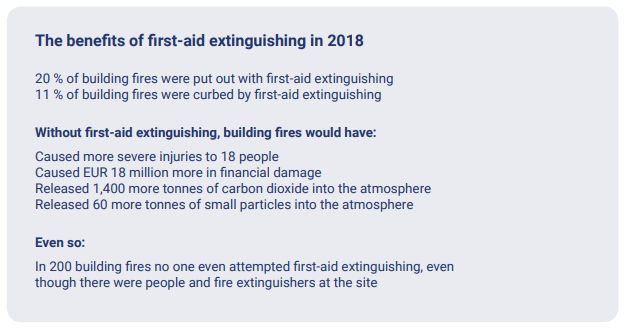