Facing this summer’s fire risks: “We have become much better at dealing with forest fires”

“We have become much better at dealing with forest fires,” says Leif […] 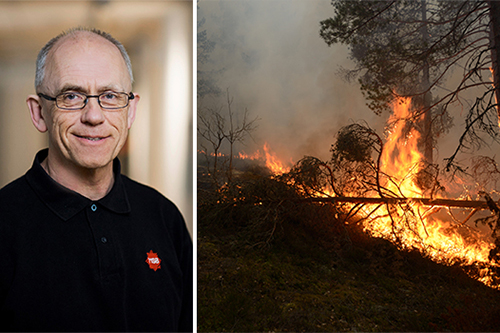 “We have become much better at dealing with forest fires,” says Leif Sandahl, fire engineer and expert on forest fires at the Swedish Civil Contingencies Agency, MSB. “After the devastating forest fires of 2014 and 2018, we have significantly increased our knowledge and the local rescue services collaborate more and share resources so that even the smallest town in the most depopulated sparsely populated areas in the north has the opportunity to get help.”

– We also have access to better data, maps, analyzes and models and better forecasts to be able to manage fire risks. We have also strengthened our air resources by now having several helicopters and smaller scooping aircraft on standby via MSB, which can support the firefighting work on the ground. And not least, we have learned and gained many valuable insights. However, I wonder how we would cope with such an exceptional summer as 2018 with the extreme drought and heat that lasted for a very long time, says Leif Sandahl.

The weather should therefore not be underestimated as the cause behind forest fires and the extreme fire processes that can occur with large burned areas. It has not been classified as a climate issue (yet) – but one thing is clear: the summer of 2018 was exceptional, according to experts. In addition to drought and heat for a long time, there are unusually many thunderstorms and thousands of lightning strikes that hit an impoverished, dry forest while there were unusually many ignitions caused by rail traffic – it is clear that it was not a coincidence that forest fires became so large in 2018. Leif Sandahl emphasizes, however, that the development of fire and the spread of fire in 2014 was even more extreme, partly because aviation fires arose and spread several kilometers over lakes.

Were we not sufficiently prepared for the great forest fires? The expertise is that the fire risks in the years before 2000 were worse and perhaps the preparations were better then. According to researchers at RISE, the indicators for fire have been lower over the past 20 years and one can speculate that one may have mentally relaxed and not been prepared for large fires to rage again.

Add to that the fact that there have been major structural changes in society that impair fire safety. The forests that are on fire are mainly in Norrland and in the depopulated sparsely populated areas there are few local fire stations left. Forest owners often live far away from their forest lands, which also does not facilitate monitoring and access to resources.

– We would probably need to engage more volunteers in the area, who are nearby and can quickly help, says Leif Sandahl.

When the Rescue Service has to drive a longer distance on rugged forest roads – and when resource reinforcements are needed, they can have 10 300 km to the accident site – the important first effort often comes (too) late if there are no local resources in place that can start the firefighting work. Even if the rescue services cooperate and thus have access to more resources, there are still long distances to reach the fire. Successful firefighting work is about quickly attacking the small fires and extinguishing them so that they do not have time to grow and guarding any hidden embers so that the fire does not flare up again. The major fires in 2018 were flaring fires that had been extinguished for 70% of the burned area. The landowner is responsible for guarding after a forest fire that has been extinguished, but the risk is that there remain hidden embers. How this important surveillance work is to be handled in order to avoid unnecessary re-ignitions is being worked on by a group within Skogforsk, the Swedish Forestry Research Institute.

There is another problem, says Leif Sandahl.

– We have about 2-3000 unnecessary fire incidents in forests and land per year. And it is not forestry that is careless. A small fire can develop into a large fire if it is not extinguished quickly, within 1-2 days, says Leif Sandahl.

We must also make the public better understand the risks and what causes fires and behave accordingly when staying in nature, Sandahl concludes.