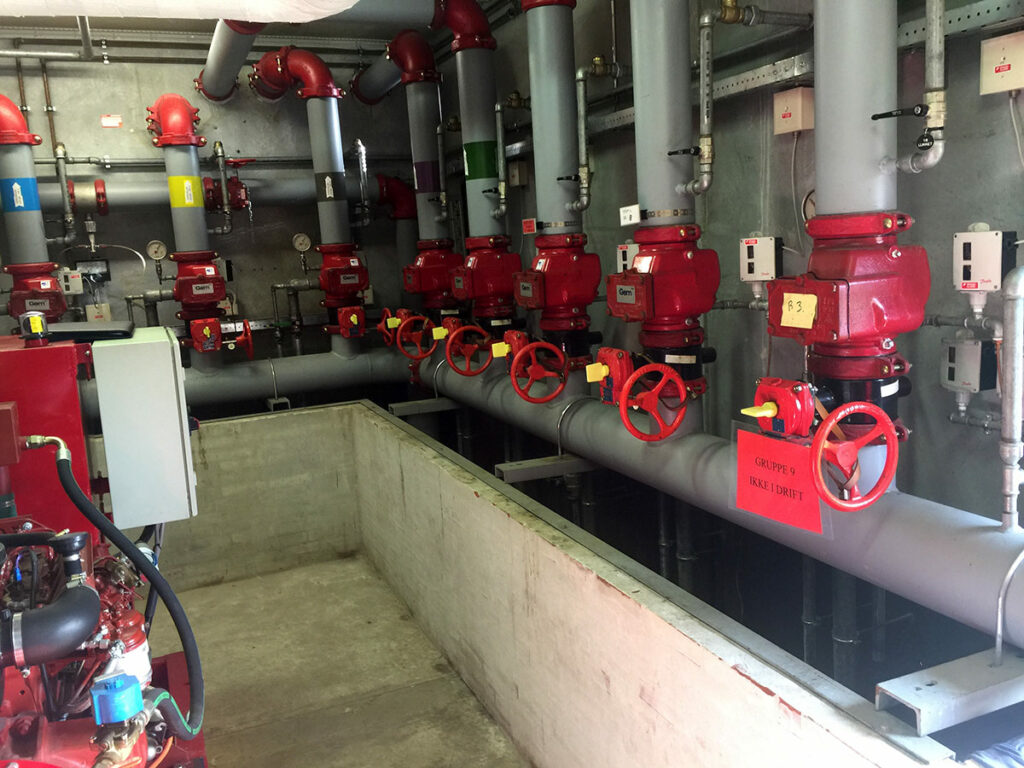 The development of flammable gases in the pipework is the probable cause of the explosions that occurred in two sprinkler systems, injuring several technical employees, back in 2014. A chemical reaction between zinc and water in the pipe system can easily form a flammable hydrogen gas that can lead to an explosion in certain situations. This is one of the conclusions in a new report published via Finance Norway.

In 2014, there were explosions in two different sprinkler systems in Denmark. The first occurred at the premises of the Danish company Movianto in Greve, where a service engineer was injured, even though the explosion actually moved out into the open air. And, shortly afterwards, in the department store Magasin in Lyngby north of Copenhagen, where an installation contractor was burned because an explosion occurred in a large pressure storage tank in a small room with the result that the explosion was particularly powerful. On both occasions, the sprinkler system ignited and exploded due to a flammable gas in the system following the draining of water.

– There was obviously a chemical reaction between the zinc and the water in the pipe, after which the hydrogen in the water was secreted and ignited by sparks created during the emptying of water in the sprinkler installation, explains Anders Frost-Jensen, Director in DBI.

Only in Scandinavia
Flemming Lindegaard, an inspector with the Danish Working Environment Authority, also points to a clear link between hydrogen in the pipe system and the explosion which occurred in Magasin. The secreted hydrogen has thus formed gas pockets and increased the pressure in the closed piping in the system. The gas escaped during operational and maintenance work, whereby the pipes were opened in order to discharge the water. In the open air, the gas mixed with the oxygen, reaching a critical concentration, which was then ignited by sparks from tools. This trio, consisting of a source of ignition, a flammable gas and oxygen, led to combustion which resulted in an explosion that was so powerful that, in the worst case scenario, can move concrete walls.

– We have, via our international work, made inquiries regarding experiences in the area throughout Europe. However, it is a phenomenon that we have only experienced in Scandinavia so far, says Anders Frost-Jensen, before elaborating:

– There can be several explanations as to how we are witnessing these explosions now and hearing about flames resulting from maintenance work. The fact is that within the last ten years we have been working with zinc-coated piping in sprinkler systems instead of black steel pipes, and the results from Norway show that the risk of an explosion is greater when zinc pipes are used. Moreover, it seems that it is possible to prove a link to the quality of the water in the area in which the installation is located, including the pH value of the water quality, because it could have helped increase the production of hydrogen in the pipe system, he explains.

Revision of sprinkler guidelines
In collaboration with a Standing Technical Committee, DBI now intends to incorporate the relevant conditions and experiences from Norway into the Danish sprinkler guidelines so that the risk of further accidents related to operational and maintenance work on sprinkler systems is minimised as far as possible.

– However, we are already able to make some recommendations and emphasise the importance of checking for abnormal increases in pressure in pipe systems and use non-sparking tools when emptying water from the system, says Anders Frost-Jensen.

In addition, the Danish Working Environment authority has issued a number of recommendations as to how work on sprinkler systems can be carried out safely. These include the use of gas detectors or explosimeters for measuring the concentration of hydrogen, recommending that no work is being carried out while the sprinkler system is being emptied, ensuring that there is good ventilation while the system is being emptied so that any hydrogen is removed from the site it is generated, and that electrical installations in the sprinkler room are installed correctly so that the generation of sparks is avoided.