Batteries in buildings ­– the so-called powerpacks – have arrived in Denmark. […] 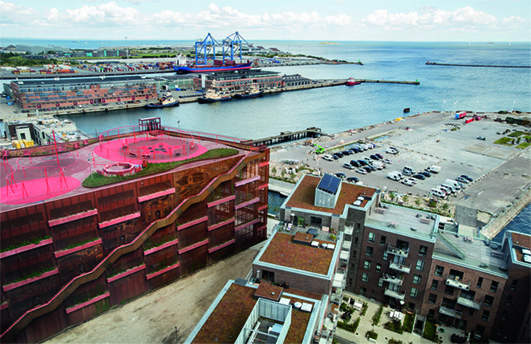 Batteries in buildings ­– the so-called powerpacks – have arrived in Denmark. In 2017, a 460 kWh battery will be installed in the ground floor of Lüders multi-storey car park at Nordhavn in Copenhagen. Here, it will be encased in its own fire cell and secured by means of inert gas and sprinkler system and an automatic fire alarm system.

Battery technology is part of the solution to the energy issues of the future. These issues, which include how we are going to get more sustainable energy from the sun and wind into our electrical grids, and, at the same time, have energy when the sun isn’t shining or the wind isn’t blowing. Better and more cost-effective battery technology means that, in the USA and some places in Europe are already well underway with installing batteries in buildings that charge when the price of electricity is low and contribute to the building’s electricity consumption when the price is high.

And, the same technology is now coming to Denmark. Initially, it won’t provide electricity to buildings but provide it to the local electrical grid instead. Specifically, Lüders multi-storey car park in Copenhagen’s Nordhavn area, electricity network operator Radius is installing a 460 kWh battery – the equivalent of the daily electricity consumption of 32 average families.

– When the energy requirement is greatest, the battery will slice the top off the strain on the electrical grid. The grid is dimensioned to handle the peak loads that only arise a few times a year. If the battery can help ensure a power supply when the load is at its highest, we can reduce our plant and operating costs in the electrical grid, explains Ole Pedersen, Technical Asset Analyst with Radius.

The battery is one of several trials in an overall project entitled EnergyLab Nordhavn, which is testing the interplay between a number of energy solutions in the new neighbourhood in the capital.

– We anticipate that the battery, which is a lithium-ion battery supplied by ABB, will be operational in February 2017. The EnergyLab Nordhavn project will finish in 2019, but the battery’s service life is 10-12 years, Ole Pedersen explains.

Prepared for the worst
Battery technology of this type and size in a building is new and is associated with various other fire technical challenges. For example, lithium-ion batteries can overheat and burst into flames or emit explosive gases and oxygen, even though the battery’s BMS (Battery Management System) minimizes the risk.

Also, knowledge of how the batteries react to fire, extinguishing and whether or not they constitute a risk in the event of a fire, is limited. The fire safety properties of the battery have to be taken into account.

– The building’s electrical installations and the battery are kept separate from each other. The five racks of battery cells, which together make up the actual battery, are located in their own battery cell constructed with a minimum of 150 mm of reinforced concrete. In each rack there are sensors which constantly monitor each cell and register heat and fire, Ole Pedersen tells us.

If there are problems with the generation of heat, the system automatically sends an alarm to the fire brigade. In addition, an inert gas device, connected to each individual rack, has been installed. That way, the system can reduce the oxygen content in the specific rack in which the heat is being generated, thus preventing it from bursting into flames.

– There is also a sprinkler system with no water installed in the room with a sprinkler head located above each rack. When the fire brigade arrive, they will make an assessment as to whether they will go into the room containing the battery to take a closer look at it. If they don’t want to do that, they can attach a fire hose to the sprinkler system from the outside and inundate the room, explains Ole Pedersen, adding:

– We hope that it never comes to that, because the water would destroy everything in the room. But we need to have a plan for the worst case scenario.

A good place to start
The fire technical solution has come to fruition through a collaboration with ABB (who have previously installed similar batteries abroad) and DBI. The Copenhagen Fire Brigade was also involved. But, how do you actually assess fire safety when the technology is brand new and there are no rules governing it.

– There is nothing in Denmark we could compare it with. Instead, we looked to the USA, where the National Fire Protection Association (NFPA) has also been considering the same issue. Previously, we were used to dealing with acid and lead batteries whereby, according to NFPA’s rules, you could have up to 600 kWh in the same room. We have only just started looking at lithium batteries and whether they behave differently to the other batteries, says René Ruusunen, who is Senior Fire Engineer with Copenhagen Fire Brigade. He continues:

– On the basis of the NFPA’s 600 kWh rule, we came to the conclusion that the battery was adequately protected and that we would not have to lay down any specific requirements with regard to their installation in order to ensure safe extinguishing and rescue conditions. However, it doesn’t mean that you will be able to freely install all batteries under 600 kWh in future. The things that require approval will change as we learn more about the fire properties of the batteries. If you want to install a battery, you must contact the local fire authorities in all cases.

– At the same time, the battery has been installed in a multi-storey car park where the footfall is low and there is direct access from the open air so that we can get to it easily in the event of a fire. In that sense, it is a good place to install the first battery of its type, says Morten Valkvist, fire engineer with Copenhagen Fire Brigade.

More electricity for your money
If the technology lives up to expectations, the battery in Nordhavn could quickly become the first of many.

– We expect that it will make good economic sense. They can help us reduce construction costs and get the optimal return from the money we invest. In future, with less expensive batteries they could become an alternative to the traditional ways of supplying the electrical grid in peripheral areas. At the same time, the batteries can be used for spectrum regulation of the electrical grid, which will become more pertinent as energy production becomes less centralized due to solar cells and wind turbines, says Ole Pedersen.

Even though the level of fire safety is high, it won’t be the related costs that stand in the way of the technology. The fact is that fire safety only accounts for 3-5% of the total cost of the battery.