Cause of multistorey carpark fire in Liverpool still unclear

Never before have 1,400 cars been engulfed by flames in a multistorey […] 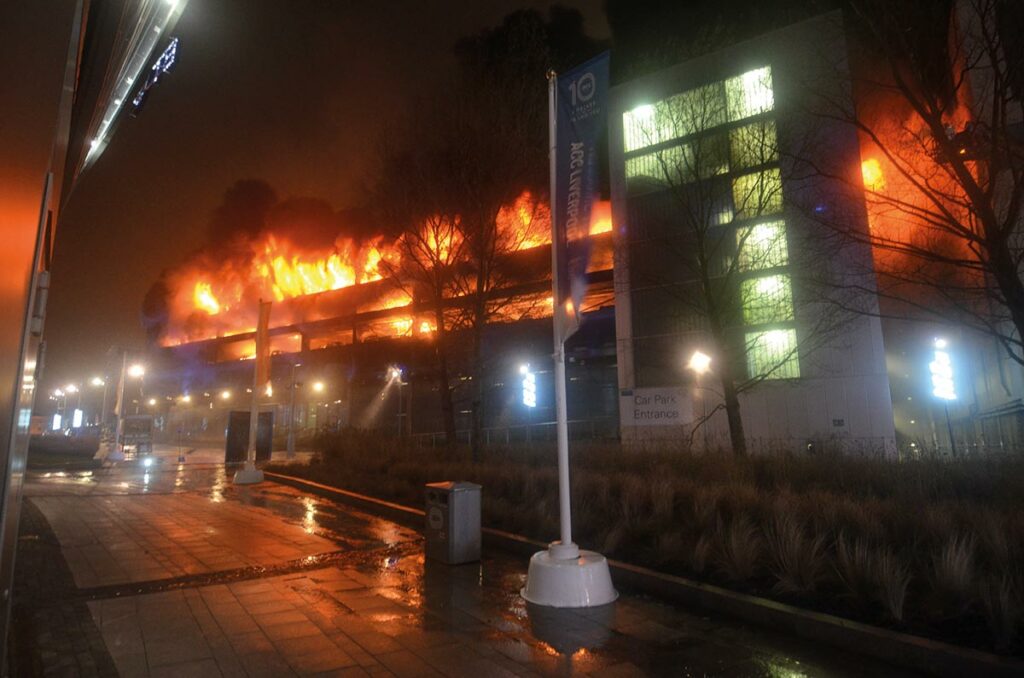 Never before have 1,400 cars been engulfed by flames in a multistorey carpark. But this is what happened in Liverpool in December 2017. The question now is, what was the reason for the violent fire spread and what effect will the fire have on parking facilities in a number of European countries?

On 31 December, fire broke out in a car in a multistorey carpark in Liverpool. The carpark was a concrete building open on all sides – very much like the ones we know in Denmark. What is totally unfamiliar is the way in which the fire developed. Despite a prompt alarm call, a call-out time of eight minutes and 21 emergency response vehicles during the time of the action, the firefighting forces were unable to prevent the fire from spreading between cars and the storey deck, causing the write-off of all 1,400 cars plus the building. Questions are now being raised as to how this could happen.

– We know of similar fires in multistorey carparks in various locations abroad, but at the worst this has meant five or six destroyed cars and in a few cases more extensive fires, but nothing comparable to the fire in Liverpool. This is an unprecedented case and ought not to be possible, says Ib Bertelsen, Customer & Relations Director at DBI, the Danish Institute of Fire and Security Technology.

Explanations sought
In particular, the rapid fire spread is a matter of surprise.

– Naturally, sprinklers would have retarded fire development, but this was presumably a fully legal building of conventional construction. However, it is possible that difficulties in response tactics played a role, Bertelsen says, with the following explanation:

– When a car fire is reported, a reduced response team is sent out in the first instance, because it is ‘just’ a car fire. And it may be hard for the fire crew to access the scene of the fire.

Another possibility is that petrol and other flammable liquids leaked from the damaged cars and contributed to the rapid and violent fire spread. The local fire force estimates that the temperature was up to 1,000 degrees.

– That’s a lot, and we don’t yet know the specific circumstances, but even so, it is surprising that the situation could go so badly wrong in a properly constructed building. It will be very interesting to hear a likely explanation of why things developed as they did, Bertelsen says.

May change dimensioning
Once the explanation has been determined, the next question is whether this will have consequences in other countries.

– If there is no reasonable explanation, then, to the extent we have similar buildings in Denmark, we ought to be thinking about how we dimension our buildings and what scenarios we are dimensioning them for, Bertelsen says.

And maybe not just multistorey carparks will be subject to change – depending on the explanation from Britain.

– To a certain extent, you can compare them with large open-air carparks. Obviously, conditions are completely different in a building, but the cars are just as tightly spaced in an open carpark.